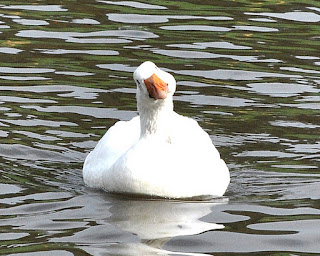 OK so I haven't been here for a while, only just realised it has been 2 YEARS! Yikes. Well just to let you know having spent time listening to David Lindo at Ilkley Literature Festival this weekend, it is time to dust off the camera and get clicking. If you don't know David Lindo is The Urban Birder of TV fame and is certainly an inspiration. OK - I'm may be a little biased since he used one of my photos of a herring gull in St Andrews fairly recently.
Sooo watch this space!....

SAVE BEMPTON CLIFFS FROM FRACKING!

- AND PASS IT ON TO YOUR FRIENDS.

I can't see too many pictures of gannets - they are so elegant and so charismatic they are hard to resist. So - Here are more beautiful original photographs of nesting North Atlantic Gannets . Follow the gannet's progress and wonder at the many displays of affection these elegant birds take part in.

Read more »
Posted by AnnMackieMiller at 06:43 No comments:

Pictures of Birds: The Grey Heron

The Grey Heron in Words and Pictures 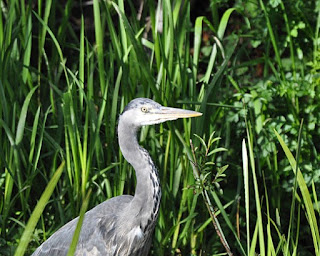 They may not be my favourite birds, especially when they are snapping up my ducklings and goslings, but there is no doubt the Grey Heron is a striking bird - This photo journal showcases some stunning photographs of The Grey Heron, scientific name -Ardea cinerea.
The grey heron is a common sight along England’s rivers and canals. A big bird, it stands around three to four feet tall when its neck is extended. It can retract the neck both while standing and always does so in flight. The heron has an impressive wing span of five to six and a half foot and tend to keep them bowed when flying. Indeed it has a slow, steady and very deliberate looking wing beat, one of the slowest of the bird family. Most adult herons weigh in anywhere between 2 and 5 pounds.
Both genders look alike being mostly grey with lighter greyish white underneath. The adults have a white crown and forehead with black on each side of the head. These tail into long feathers that are often hard to see except when the bird is in threatening or courting stance. The long neck is black and white and the wings grey with white ‘shoulders’ and black edges . Herons have very long strong, actually wicked-looking beaks. In winter they are yellowish with a black tip but during the breeding season are bright orange as this one seen here. You may also note the orange ‘flushes’ on otherwise grey or yellowish legs. This flush will also disappear once the breeding season is over. 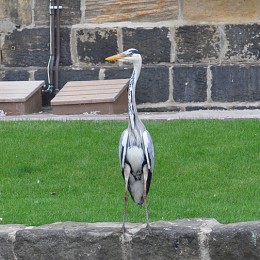 This particular bird is quite striking when see from the front. One couldn’t help comparing him to someone in a Halloween costume with a skeleton painted on him. He stands purposefully, his legs almost braced ready to leap from stillness to action in a second. It is this stillness that is the heron’s hallmark characteristic. It is possible to miss spotting them standing perfectly still either on the bank or in shallow water. They show infinite patience and unwavering concentration in waiting for prey to step close enough for them to snatch. You can also see them stalking as smoothly as any cat. They take slow strides on those long legs without stirring the water or alerting their victim. Herons feed mainly on fish but will take frogs and young chicks.
It is always rather alarming to see a heron during the breeding season and this one was very definitely on the hunt. It was first spotted when some geese, including some Canada geese were making a noise close to a couple of nests. It was easy to see what had alarmed them but the combined noise seemed to set it to flight. It took off down the canal, stopping next on the opposite bank across from where there are some domestic fowl being kept. He watched intensely for several minutes before turning his attention back to the canal, perhaps deciding he had little chance in the allotments. 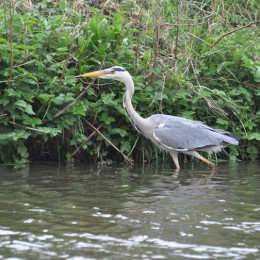 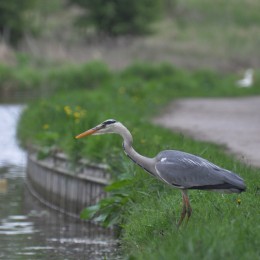 He flew over to the far bank , stood still then started a slow paced stalk towards where there is a moorhen’s nest but was out of luck there too. I was just in time to catch him taking off and followed him down the canal where I found him standing on the edge of the canal, outside some apartments. He had spotted our little white hybrid mallard duck and her thirteen ducklings. Mallard ducklings are easy meals for herons as they tend to busily swim far and wide around the mother instead of sticking close to her side as goslings do to their adults. Fortunately he missed out this time too. 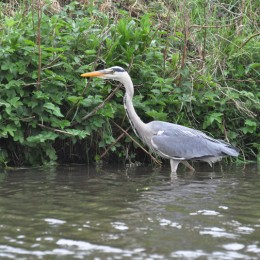 Along Bingley canal the ducklings and new chicks are having a bad year and one of the reasons for that is the constant presence of grey herons. Herons feed mainly on fish but will also take small birds and frogs.
It easy to miss them when you are out walking as they stand so still. You are first likely to spot them standing statue-like on the edges of water, often in reed beds such as this one pictured here. They can stand still for long periods of time and do so, waiting and watching for prey to come within reach. Those striking yellow eyes miss nothing.
Rather than stab, that long thin beak is used to snatch. It must also come in very handy for preening as you will see later in this little photo diary. 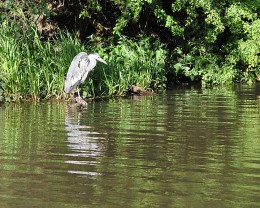 Herons are quite stately birds. They can stretch out that long neck so they reach their full height of around 4 foot, or they can hunch down, the neck almost disappearing between the shoulders. They typically have 20 vertebrae making up the neck.
With hunched back, they remind me of vultures. These birds look almost pre-historic and it is no surprise that fossils of them have been found going back millions of years. The fossils are not common probably because of the fragility of the bone structure but they have been found and dated back 60 million years. 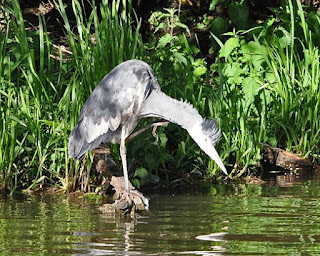 Herons stand motionless in shallow water. On bright days they prefer to be in shadow, in places where fish go and where the fish will not see them. Like any angler, patience is their strongest ally. At times they stalk very slowly along the edges of the water, raising one long leg high and slowly placing it down careful so they cause no ripples to betray their presence.
Once it has spotted its prey, the heron slowly lowers its head to within touching distance of the water, again, taking care not to scare the fish away. Then, suddenly, as quick as a flash, it will strike and catch the fish in that sharp beak. It is snatched rather than speared and disappears, head first, quickly down that long gullet. 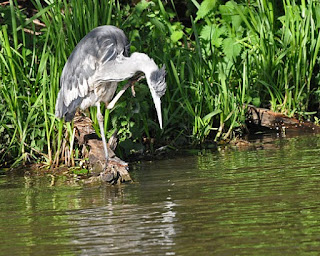 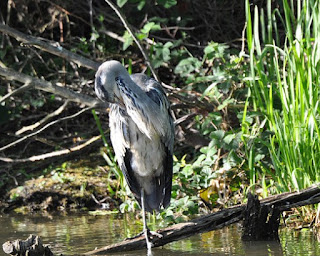 Feathers need taking care of, so like any bird it is common to see herons preening. They must have an advantage with that long beak. They have an oil gland near the base of the tail that it can take oil from with its beak. Then it uses the beak to preen the feathers to repair damage and to keep them waterproof with the oil.
They also have what are called powder feathers on their chest that create a powder or dust from them to clean up with. A lot of their food, for example frogs, are slimy and the powder helps to soak up the mess.
They are also quite adept at scratching with a long toe to get rid of parasites and distribute the oil. Indeed, the central toe has a serrated claw to help preening. 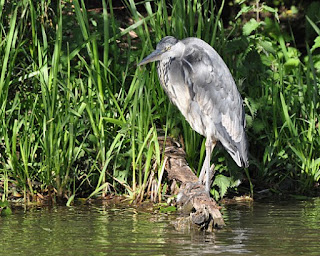 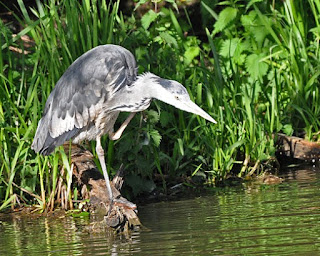 As they are taking to the air, heron's stretch out that long neck but it is soon drawn back into the body, the better to protect it. They have a huge wingspan of around 6 feet and typically fly with bowed wings. They stretch out their long legs steam-lined behind them in flight. For such a big bird they are surprisingly agile in the air and are capable of sudden twists and dives. 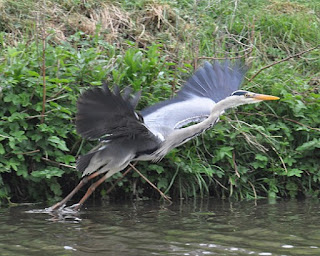 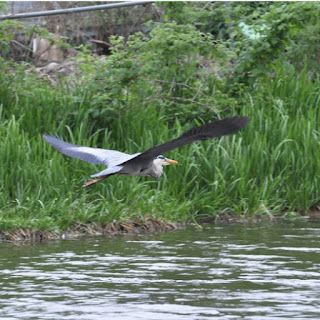 Posted by AnnMackieMiller at 03:00 2 comments:

Visiting Loch Leven nature reserve - day one. I'm lucky enough to be spending a couple of weeks house and pet sitting in Milnathort near Kinross so I'm in easy reach of Loch Leven  so I thought this was the perfect opportunity for me to write an ongoing journal.

Loch Leven in the old county of Kinross north of Edinburgh in Scotland. It is a huge loch stretching about 5 square miles and is maintained by The Scottish Natural Heritage and the RSPB. With a round the loch trial at 13-14 miles it is a wildlife haven for thousands of birds and with a bit of luck I'll be able to capture at least some of them on camera.
Read more »
Posted by AnnMackieMiller at 08:07 2 comments:

Canada Geese and Goslings
Early in April 2011 a pair of Canada geese were seen mating on Bingley canal. The female duly made her nest on the bank and laid eggs. She was very well hidden although the nest was very close to the water and often all that could be seen was the top of her black head. If you didn't know to look, you would never have seen her. What gave away the location of the nest was the patrolling presence of the male on the canal. He never left, keeping careful watch and chasing away all and sundry. The only one they has trouble with is Grumps the mute swan who thinks he is king. This is a photo diary of the story of a Canada goose's nest and the arrival of goslings
.

Welcome and thanks for visiting. I hope you enjoy my photo journals on British Birds. I am particularly fascinating by bird behaviour so I hope you join me in my journeys.

I have hundreds of articles - check some out why don't you?